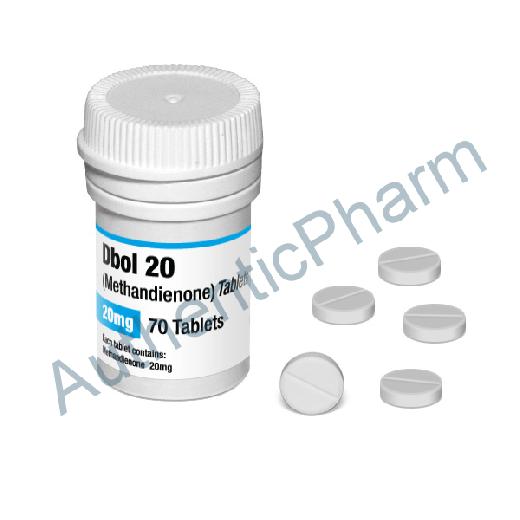 Dbol 20 (Methandienone) is an orally applicable steroid with a great effect on protein metabolism. Methandienone is a derivative of testosterone and has a very strong anabolic and androgenic properties. It has a great effect on protein metabolism and promotes protein synthesis. This effect manifests itself in by creating a positive nitrogen balance, supporting the build up of protein and, thus, skeletal muscle mass. Methandienone also induces an improved sense of well-being. Dbol 20 (Methandienone) is one of the most highly effective mass building steroids ever created. It was, in fact, created specifically for athletes to use to improve performance (although it was claimed to have therapeutic ability). It provides highly impressive weight and strength gains for most users. Experiencing a 3-4lb weight gain per week is not unheard of, especially in novices. It must be noted that a lot if this is water weight, and that with higher dosages gynecomastia, high blood pressure, and acne could occur. Dianabol when taken orally becomes active very rapidly, but only remains active for less than half a day. Often, for this reason, dosages were spread through the day.

It is Known that 10 mgs of the Dbol 20 (Methandienone) was enough for full androgen replacement in a man, and this dose increased androgen anabolic activity roughly 5 times over normal and provided a reduction in natural cortisol activity of between 50-70%. Despite this, many athletes take 50-100mgs daily. It would appear that over 50mgs/day, there is a point of diminishing return. However, not all effects of Methandienone are positive. One of the most known side effects of Dbol 20 overuse is on the liver. However, these effects are short lived and liver values return to normal. Some of the other effects are estrogenic effects, the risk for which is minimized if Dbol 20 (Methandienone)) use is stacking with an anti-estrogen. This side effects may include gynecomastia, salt and water retention, high blood pressure, oily skin, facial hair and acne (though not very severe). As a result of the mild androgenic constituent of Dbol 20 (Methandienone), high doses may also lead to some hair fall in the male pattern. It may also lead to changes in disposition like more aggression and irritability or in some cases the opposite of it, causing the individual to go into depression. However, most of the effects are thought to be non-androgen receptor mediated because Dbol 20 (Methandienone) is a very weak Androgen Receptor binder. This also proves the low aromatase activity of Dianabol. Dianabol (Methandienone)'s users do not have to worry about sudden decrease in their natural testosterone production since the side effects are not considered to be androgen receptor dependent. Dianabol aromatises easily so that it is not a very good steroid when working out for a competition but, for those wishing to acquire raw size, it is a star among oral steroids. Dbol 20 has a half-life time of only 3.2 - 4.5 hours. Meaning that you should take dianobol twice a day to enjoy a rich content in the blood stream.