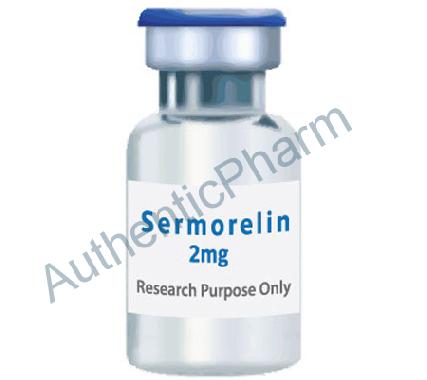 Sermorelin is a biological active analog of growth hormone releasing hormone (GHRH) that is produced by the human brain to stimulate production and release of growth hormone by the pituitary gland. Sermorelin stimulates production of the body's own HGH. It is a truncated analog of growth hormone releasing factor (GRF 1-44) that is naturally produced by the brain to stimulate pituitary production and secretion of HGH. During youth, ample amounts of GHRH are produced so that the pituitary is able to provide the body with sufficient growth hormone to sustain health, vitality and otherwise normal aspects of form and function. GHRH declines with age causing reduced production and secretion of pituitary HGH and thereby increasing the sequelae of growth hormone insufficiency. Unlike HGH, Sermorelin affects a more primary source of failure in the GH neuroendocrine axis, has more physiological activity, has a better safety profile, and its use for adult hormone deficiency is not restricted. While Sermorelin produces the same effects on body composition and provides the other benefits of HGH, it also has some additional and important benefits. The effects of Sermorelin are regulated at the level of the pituitary gland by negative feedback and by release of somatostatin so that safety concerns associated the HGH overdosing are minimized or completely avoided. Tissue exposure to HGH released by the pituitary under the influence of Sermorelin is episodic not "square wave", and therfore, prevents tachphylaxis by mimicking normal physiology. By stimulating the pituitary it preserves more of the growth hormone neuroendocrine axis that is the first to fail during aging.