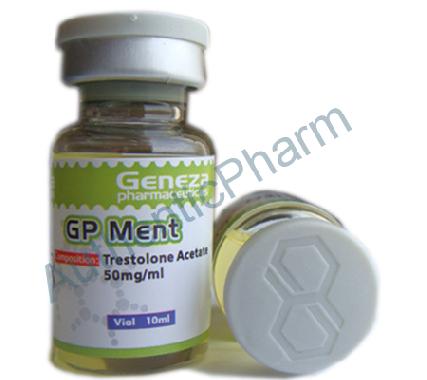 GP Ment is a product containing the hormone trestolone acetate (7 alpha-Methyl-19-nortestosterone). General steroid potency is usually increased with 7-methylation, which is a trait that is well illustrated with Ment. When methylation increases steroid potency it is usually due to one or two things, most notable being the increased resistance to being metabolized by the liver, or reduced affinity for constructive binding proteins. In the case of Ment, we see a drug relatively fast metabolic breakdown, but that doesn't bind to SHBG. The reduced binding to SHBG is the reason that Ment becomes a much more potent steroid. When first studied, research showed that Ment could be 3.5-23 times more anabolic than testosterone, yet was only 3-6 times more androgenic. When a study was later done on primates, Ment was shown to have 10 times more anabolic potency than testosterone while having much lower effects on the prostate. In a study to show how well Ment binds to the androgen receptor, it was discovered that this drug binds to the receptor more strongly than both testosterone and nandrolone. Another study looked at the ability for Ment to restore sexual behavior in men suffering from symptoms of low testosterone, which is one of the main objectives of androgen replaceMent therapy. During this study, Ment was shown to be just as effective as testosterone therapy for these purposes. If ever marketed for use, Ment will be aromatized by the body and will cause synthetic estrogen buildup which will carry a high level of biological activity. This means that gynecomastia can be a problem, as well as other estrogen related side effects which can include excess water retention causing the user to have a bloated look without much definition to the muscle structure and can also lead for excess fat buildup to occur. Because of this, users of Ment will most likely want to run some sort of anti-estrogen during their cycle to keep levels down. Ment has not yet been developed for use, so it's not known what the doses will be. Due to the study results so far, it is suspected that a low dose will be sufficient due to the fact that this drug has been shown to be several times more potent than testosterone.