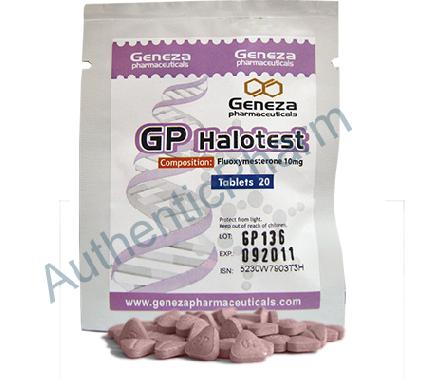 Fluoxymesterone (Halotestin) is an oral steroid. Halotestin is a steroid with a strong androgenic properties and at the same time has very little anabolic effect. Its fluoxymesterone substance is a derivative of methyltestosterone and intended for oral use. On the basis of this quality it is used mainly when the athlete needs more strength gains, but not muscle mass. Weightlifters and powerlifters, who must maintain a certain weight class often use Halotestin as they are interested in this increase in strength without increasing weight. In bodybuilding this steroid is used almost exclusively in preparation for competitions, as the substance is strongly androgenic, and at the same time is slightly aromatized. Halotestin helps the athlete to achieve high levels of androgens with a slight level of estrogen. With a low fat content Halotestin provides the athlete a more pronounced and well defined muscle hardness. Anabolic effect of Halotestin is quite small compared with androgen. Based on the characteristics Halotestin athletes use it mainly when the athlete is more interested increase in strength. Powerlifters and weightlifters who should remain within a certain weight class often use Halotestin, because they are primarily interested in increasing strength without body weight gain. In bodybuilding this drug is taken only when preparing for a competition. Since Fluoxymesterone is a strong androgen with a very low level of aromatization - it helps the athlete to get maximum predominance of androgens over estrogens. Bodybuilders due to Halotestin receive excellent hardness and sharp outlines of the muscles. Although muscle volume is not increased, the athlete appears more massive since the density of the order increases. It is known that the daily dose to 20 mg does not cause water retention. During the diet Halotestin helps the athlete get through difficult, intense training with increasing aggressiveness. This is another reason why this steroid is so popular among powerlifters, weightlifters, football players and boxers. Conventional dose Halotestin range from 20 to 40 mg / day. Bodybuilders are usually limited to a dosage of 20-30 mg / day, while powerlifters often use 40 mg per day or more. The daily dosage is usually divided into two equal doses in the morning and evenings with some liquid. When taking Halotestin athlete can experience a number of rather severe side effects. Perhaps the only Anadrol-50 and Methyltestosterone may have a greater negative impact on the athlete. Those who would like to try Halotestin should limit its application period is 4 - 6 weeks, and do not use more than 20-30 mg daily. Fluoxymesterone has a strong potential effects on the liver, so it is likely damaged. Other frequently-observed side effects - the increased production of the sebaceous gland (which goes hand in hand with acne), nasal bleeding, headaches, gastrointestinal disorders and reducing the production of its own hormones the body. There are frequent occasions when atelty become easily irritable. Gynecomastia and high blood pressure caused by edemas do not occur when taking Halotestin. Women should avoid takig Halotestin (fluoxymesterone), as this can cause real and partially irreversible virilization symptoms.