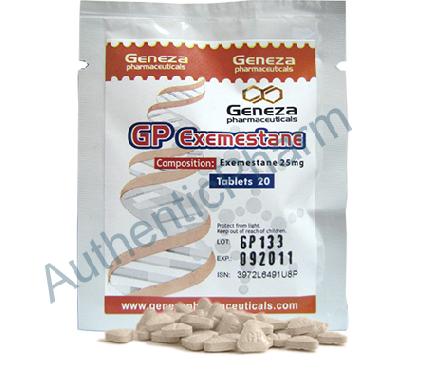 GP Exemestane by Geneza Pharmaceuticals is an anti-estrogen which contains 25mgs of the substance Exemestane per tablet. Aromasin, as it is most commonly called, is a very potent AI which works by blocking the aromatase enzyme in the body. This drug was originally developed to help fight breast cancer in women by reducing estrogen which some believe to aid in cancer cell growth. While not quite as strong as Letrozole, GP Exemestane is considerably stronger than Anastrozole. Studies done with this substance typically show around an 85% reduction in estrogen levels in the body. This can be very useful to bodybuilders who are using aromatizing compounds such as testosterone. Typically, one will begin the use of GP Exemestane the same day they begin their cycle. It is also important to note that Aromasin has shown to be very effective at increasing testosterone and IGF levels in the body. Because of this, this drug is also very useful during PCT regime when one is trying to restore natural testosterone levels in order to avoid a post cycle "crash". It is important to keep doses of GP Exemestane reasonable, as too much estrogen suppression can result in hindered muscle gains and loss of sex drive. One 25mg tablet a day should be sufficient for effectively keeping estrogen related sides out of the picture, or for effectively raising natural testosterone levels during PCT.