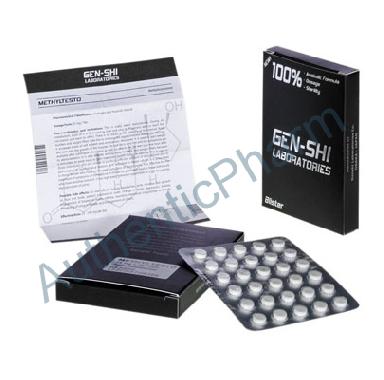 METHYLTESTOsterone is a synthetic anabolic steroid used widely in clinical medicine. It is essentially a derivative of testosterone but more stable. It is chiefly used to treat individuals who have either a deficiency or lack of testosterone in the body. Testosterone is essential for the development of sexual characteristics and growth of the body. In the last decade, the drug has also been used to treat advanced breast cancer in females. METHYLTESTOsterone has been widely used by athletes and bodybuilders. The steroid is taken principally to enhance the body and stimulate the psyche. Most bodybuilders who take this drug claim that it causes spontaneous bursts in energy associated with increased aggression. This feature of the drug is used primarily by weight lifters and professional wrestlers. Many athletes also claim that the drug improves their ability to perform exercise at intense levels. While the drug can be taken orally, some athletes crush the tablets and place the drug underneath the tongue for faster absorption. Within minutes after placing the drug underneath the tongue, the drug can be found in the blood circulation. However, METHYLTESTOsterone rarely produces any immediate effects and the mental changes claimed are believed to be a placebo effect. METHYLTESTOsterone is converted into estrogen in the fatty tissues and will induce gynecomastia and fluid retention. Thus, some bodybuilders take Arimidex or Tamoxifen to counter these side effects. The drug is usually taken for a few weeks and then recycled with Arimidex during the washout phase. METHYLTESTOsterone is not a very potent anabolic agent and it is also often combined with thyroxin or growth hormone. The weight gain seen with METHYLTESTOsterone is gradual and not very pronounced. Most bodybuilders prefer this drug because it does tend to increase aggression and improves performance for short duration. Side Effects When METHYLTESTOsterone is taken at low doses, the side effects are rare. However, long term use is known to be associated with a varied number of side effects- all of which are reversible when the drug is stopped. For the female who decides to take METHYLTESTOsterone, there are virilizing side effects which are not always reversible when the drug is stopped.  Like all anabolic steroids, METHYLTESTOsterone also has a number of side effects which includes: