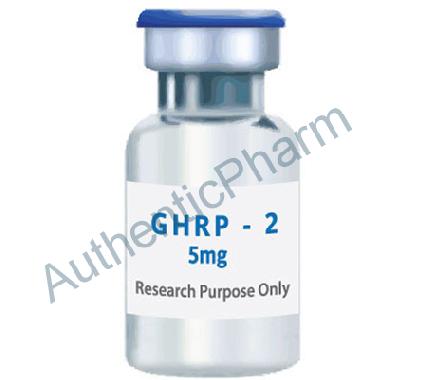 GHRP-2 is a peptide that is a member of the growth factor family of peptides and is very similar in structure and function to GHRP-6. This peptide has a strong effect on the body's release of GH. It almost promotes hunger and appetite by stimulating a release in Ghrelin which is a peptide in the stomach which promotes appetite and gastric emptying. GHRP-2 acts by stimulating the anterior pituitary gland which causes an increased released of GH. GHRP-2 is used for a range of medical issues including low natural GH production and to promote weight gain in abnormally thin individuals. Users of this substance often report an increase in strength and muscle mass, along with an overall sense of better well being and decreased body fat. The peptide affects the neurons in a similar fashion that some steroids do causing a significant in strength. GHRP-2 can also be used to stimulate the body's natural GH production after it has been slowed down due to synthetic GH use. It is important to note that moderate use of this peptide will usually be accompanied by a gain in water weight or bloat as it is often called. This may make the fat burning effects of the substance go unnoticed during use. This is also a good substance to use when rehabilitating injuries as it is shown to have a very positive effect on tendons and connective tissue strengthening and regeneration. Users will often use 100-600mcg a day of the drug depending on goals. Those looking for slightly increased sleep quality and tendon/join health improvement will generally stick towards the low end of this dosage amount while those looking to use GHRP-2 for it's muscle and mass building effects will typically ramp up the dosage considerably. The drug is available from many research companies and the relatively low cost makes it a positive addition to any bulking cycle. It has also been shown to be a great addition to GH usage and studies have shown that the addition of insulin even furthers the effects it has on GH secretion and IGF growth factor secretion by the liver.