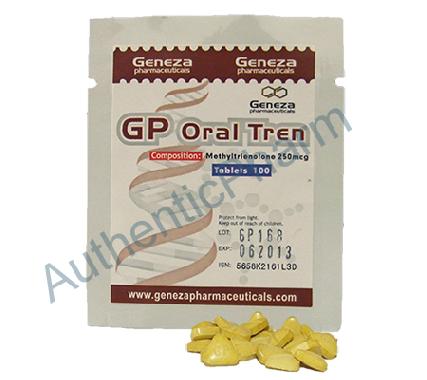 GP Oral Tren (methyltrienolone) is a form of the popular steriod Trenbolone which has been modified to become Orally active.
Trenbolone is the most powerful overall steroid in use by bodybuilders today. Tren, as it is often called, is both highly androgenic and anabolic. It is chemically unable to aromatize, and therefore produces no estrogen buildup. This, along with its high androgenic properties, makes the muscle produced by this drug very hard and defined.

Trenbolone first got its reputation when it was used in the legendary steroid, Parabolan. Users of this drug often noted dramatic results that were nothing short of amazing, and after it was unfortunately discontinued, the remembered effects of the substance gave it cult like status and the market was flooded with bunk Parabolan amps by those looking to profit off the extreme popularity and fan base that this steriod's incredible results had sparked.

Trenbolone was also used in cattle implant pellets, where the substance was used to increase the lean mass of the cattle, while reducing the fat on the animals. Kits became widely available on the internet allowing bodybuilders to convert these pellets into injectable solution. Fina, as this homebrew oil was often called, quickly became a favorite of steroid users, like its relative, Parabolan, had done many years before.

Oral Tren can be liver toxic and users should keep usage of this product to reasonable dosages and time frames. Typically 1-2 (250mcg) tablets of Oral Tren for two to three weeks. Because of its strong androgenic properties, Oral Tren should not be used by women.